Menu
This year’s scary new drug is neither new nor scary. 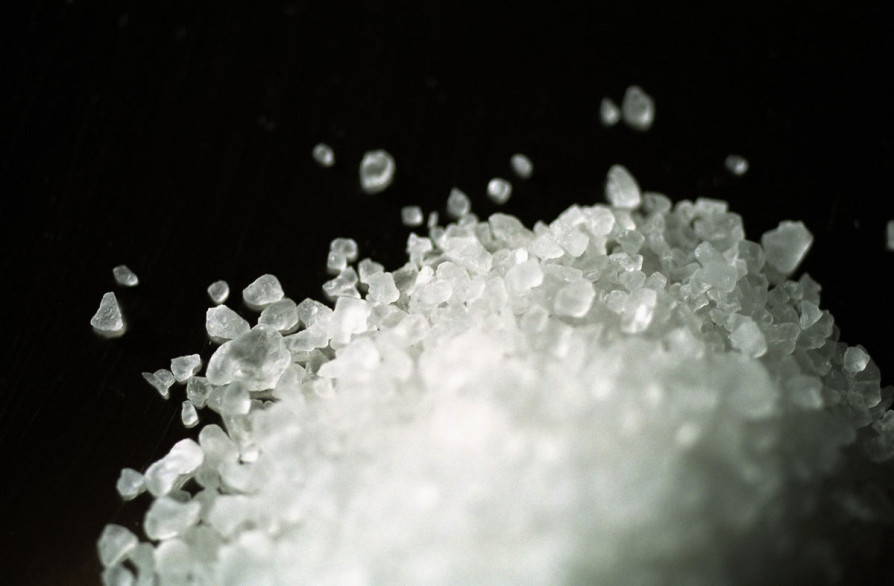 If you have been paying attention to recent news reports about “the dangerous new drug sweeping Florida,” you know at least two things about flakka: It gives you “superhuman strength,” and you should nevertheless avoid it because it will turn you into a raving lunatic running naked through the streets, chased by invisible enemies, until you drop dead of hyperthermia or a heart attack.

Unlike those malevolent pursuers, flakka’s dangers are not entirely imaginary. But the way they have been hyped by the press illustrates once again how yellow journalists collaborate with drug warriors to keep the public in a constant state of panic about the latest chemical menace, which is always worse than the last one. 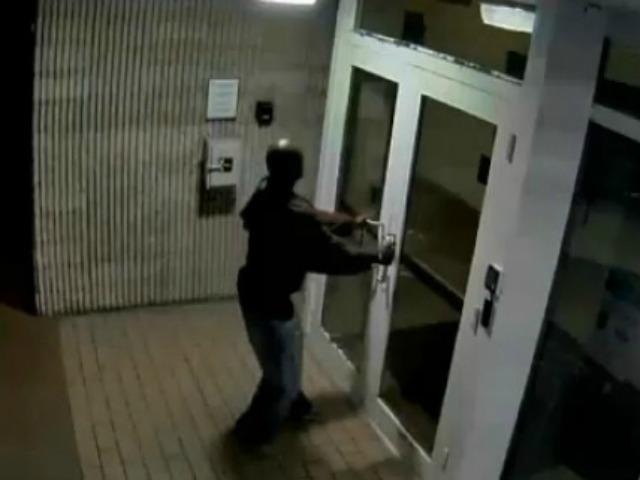 The Fort Lauderdale Sun-Sentinel, which calls flakka “$5 insanity,” quotes a drug treatment counselor who claims “longtime addicts who have tried flakka” are “terrified of it.” In fact, he says, “This is as bad as it gets.” Until the next drug scare, presumably.

If you want to generate alarm about an exotic intoxicant, it helps to keep the exact nature of the threat mysterious. People who have never heard of flakka before naturally wonder what it is, but that question is harder to answer than you might think. Flakka is alpha-PVP, a synthetic stimulant banned by the Drug Enforcement Administration (DEA) at the beginning of 2014. Except when it isn’t.

“You got no idea what’s in it when you take it,” Sgt. Ted Taranu of the Broward Sheriff’s Office told WFOR, the CBS station in Miami, last month. “It’s whatever the person puts in it to sell it.” Jim Hall, a Nova Southeastern University epidemiologist who studies drug trends, told the station, “We’ve had seizures of flakka in South Florida that have turned out to be combinations of cocaine plus methamphetamine plus heroin.”

Hall elaborated on that theme in an interview with CBS News two weeks ago. “One of the kind of 21st-century trends in drug supply is creating new brand names like flakka and building its popularity and then selling anything,” he said. “The main issue with this whole category is that the user just doesn’t know what they’re taking or the strength of what they’re taking….We’re referring to these as the ‘guinea pig drugs.’ Often the dealer might not even know what they’re selling.”

This kind of uncertainty, which is a predictable and familiar feature of the black market created by drug prohibition, is something to keep in mind whenever strange behavior is attributed to a scary new drug. In the absence of a toxicological test, there is no way to know whether someone who says he took flakka got alpha-PVP, something else, or a combination of various drugs.

To make matters more confusing, press accounts sometimes distinguish between flakka and “bath salts,” even though that term refers to synthetic versions of cathinone, the active ingredient in the stimulant shrub qat. That category includes alpha-PVP, which is why the DEA decided to ban it. Yet Timewarns that flakka “can be even stronger than crystal meth or bath salts.” 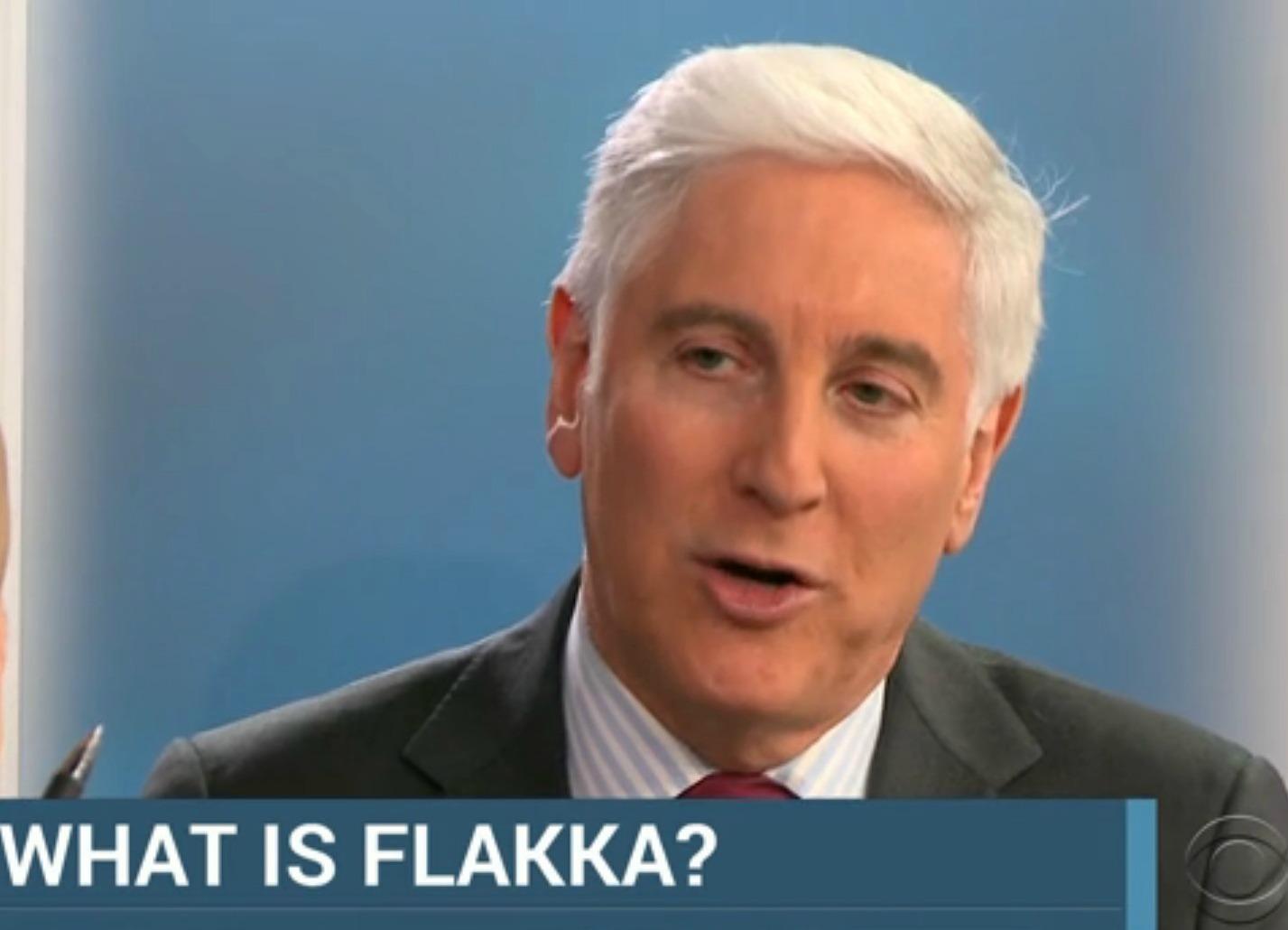 How strong is that? “On a scale of one to 10,” Lt. Dan Zsido of the Pinellas County Sheriff’s Office told the CBS station in Tampa Bay last month, “flakka is a 12.” Apparently going to 11 is not good enough anymore.

Flakka reportedly can impart its amazing strength to people who consume it. Last month a two-and-a-half-minute WFOR story about a guy who tried to break into the Fort Lauderdale Police Department after taking what he described as flakka included five references to “superhuman strength” or “super strength.” Yet the station reported that the man, who said he was seeking help because cars were chasing him, “violently and with every ounce of strength in his body tried to get inside,” and “the most he got was a crack.”

Such supposed feats of strength gave rise to a legend. “New Designer Drug Flakka Gives Users Super-Human Strength,” Yahoo News announced in a story posted last week. “You’re hearing about this aggression, super strength,” said John LaPook, chief medical correspondent at CBS News, in an April 2report. “It reminds me of angel dust in the early ’80s….I was in the emergency room at Columbia back then, and I’d know somebody who came in dusted because they’d come in with seven policemen holding down every part of their body, and they’d have, like, superhuman strength, and it sounds like this is a very similar thing.”

It does sound like a very similar thing, but not in the way LaPook means. Tales of superhuman strength have been associated with various drugs over the years, including cocaine in the early 1900s, marijuana in the 1920s and ’30s, and PCP (a.k.a. angel dust) in the 1970s and ’80s. “The notion that drugs produce superhuman strength is simply not true,” says Columbia University neuropsychopharmacologist Carl Hart, who studies the effects of stimulants such as crack cocaine and methamphetamine. “It has never been shown. This is just a continuation of the theme. It should raise red flags for people if they see ‘superhuman strength.’” 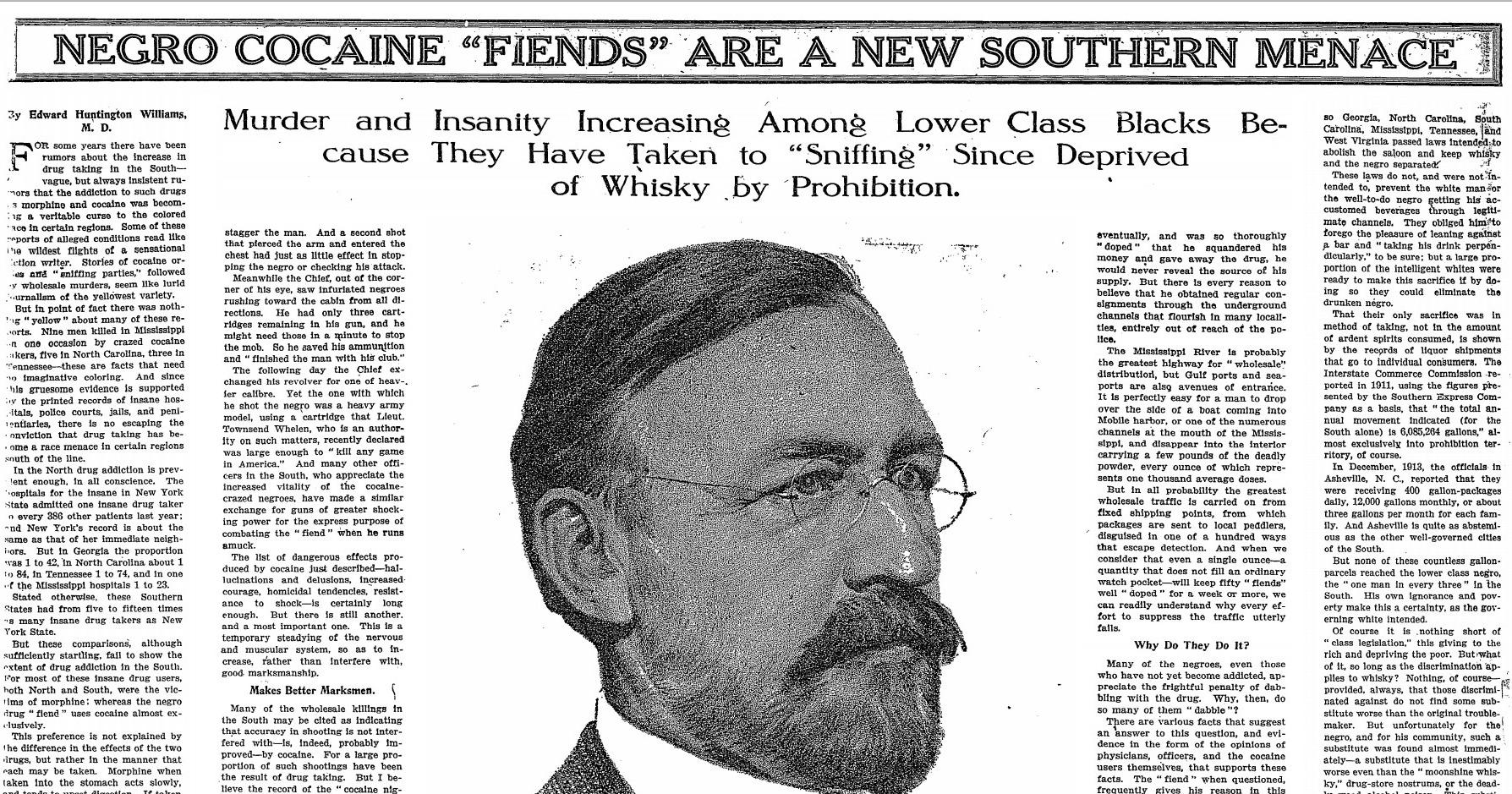 Hart notes that people who drink too much may become “out of control or difficult to manage,” but “you can’t say [someone has] superhuman strength with alcohol because no one will believe you.” Similarly, “you can no longer make up those stories about marijuana, because there are many people in our society who have used marijuana, so if you say that, you instantly lose credibility with all of those people.” By contrast, “you can say it with these new synthetic drugs because people don’t know what these drugs are. And if they don’t know, maybe it’s true. They want to believe it. It’s a great story.”

The reality is less exciting. “When you look at the effects of cathinones in the laboratory,” Hart says, “they just look like any other stimulant.” While the agitation and paranoid delusions described in stories about flakka might be seen in some people at high doses, he says, “that’s a rare sort of thing,” and the bizarre behavior may be due to other factors, such as sleep deprivation or pre-existing psychological problems. Potentially fatal reactions such as heart attacks and hyperthermia likewise are “possible in limited and extreme situations,” he says, but “unlikely.”

A good rule of thumb is that if a drug user ends up on the news, he probably did something unusual. Yet news reports present these dramatic incidents—the paranoid streaker in Fort Lauderdale, the naked gunman in Lake Worth, the guy who attacked an 82-year-old woman in Riviera Beach, the West Park drug dealer who accidentally killed his friend with a shotgun, the man who gotimpaled while climbing the fence around the Fort Lauderdale police station—as typical. “That’s about irresponsible reporting,” says Hart. “That’s about getting readers excited to read what you’re writing.”

Although flakka took the blame for all these incidents, one need not dig far to find competing explanations. The Sun-Sentinel notes that the man who got stuck on the fence “told police he had been diagnosed as schizophrenic.”According to the Broward/Palm Beach New Times, the naked man who stood on the roof of a Lake Worth apartment building, holding a handgun and threatening to kill himself, “said he was depressed and claimed to be under the influence of a new designer street drug called ‘flakka.’” WTVJ, the NBC station in Miami, reports that the drug dealer who accidentally shot his buddy in the face had not slept in three days, had taken MDMA as well as flakka, and was drinking vodka too.

Why focus on flakka? Because everyone else focuses on flakka. “In the media,” says NBC News, “it’s been dubbed ‘the insanity drug.’” As usual, anti-drug hysteria validates itself.

If you are seeking a calmer view, a good place to look is Erowid.org, an invaluable source of candid information about psychoactive substances. Erowid has two accounts from alpha-PVP users, one of whom likes the drug and calls it “a completely misunderstood compound.” The other user says the stimulant raised his heart rate uncomfortably and was “not worth my time.” Neither of them ran naked through the streets or tried to break into a police station. 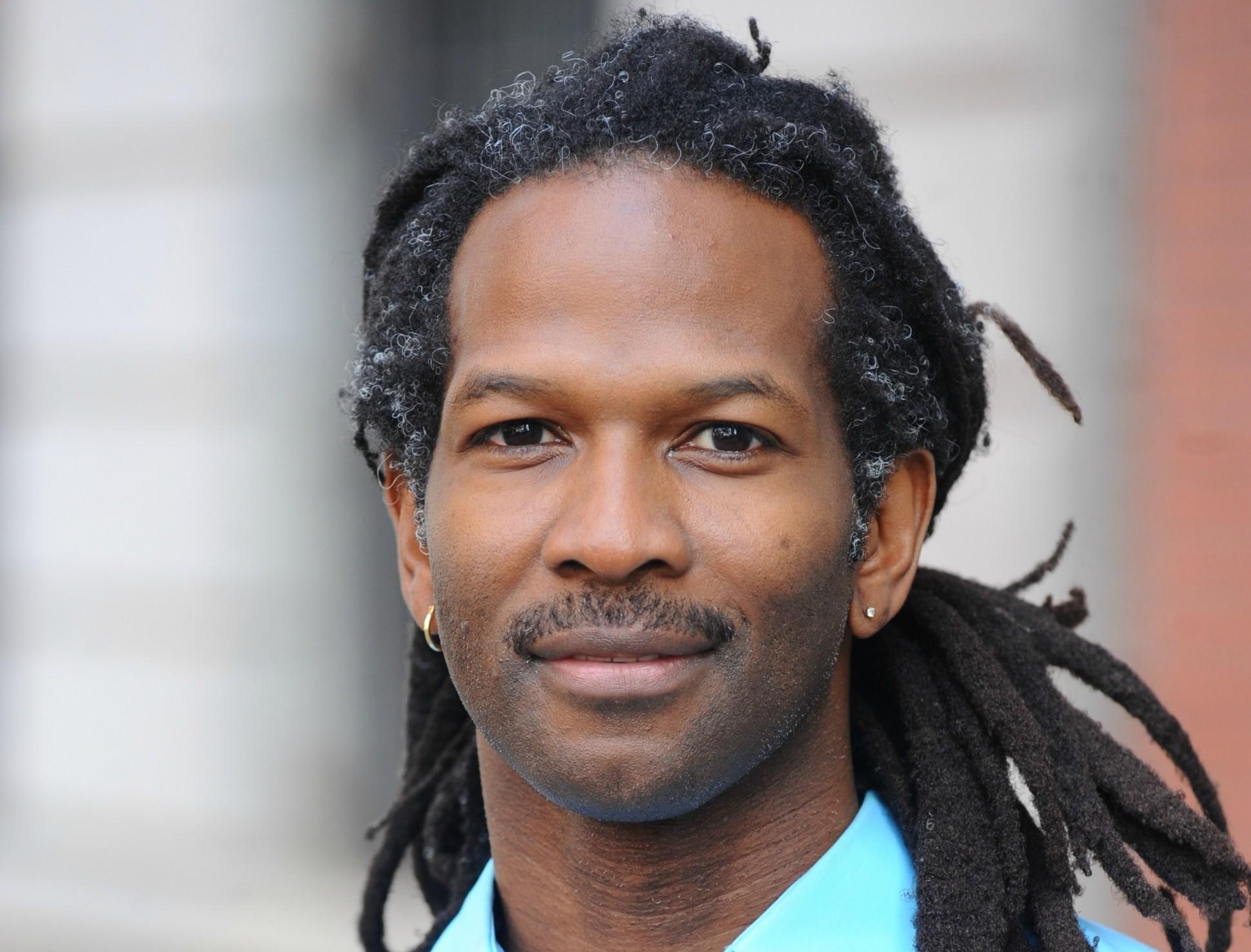 “The fact that the vast majority of the people who use these substances don’t exhibit that behavior tells you that it’s not the drug,” Hart says. In fact, a drug that frequently caused such reactions would never become popular enough to attract press coverage, since “people don’t continue to do things that lead to freaking-out behavior.” WFOR calls flakka “the hot new drug of choice,” saying it’s “popular among the 18-to-30-year-old crowd and is big on the club scene.” It is hardly plausible that so many people would want to use a drug that commonly sends its users to jail or the hospital.

“A number of people have used these substances, and they know that did not happen to them,” Hart observes. “So the people who are providing this sort of hysterical misinformation lose all credibility with those people. That’s my major concern. We don’t want to lose credibility, because we want to make sure we keep everybody safe, and the only way we keep people safe is if they trust us and listen to us.”