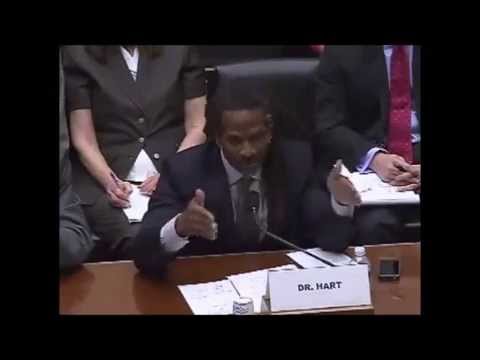 I testified before Congress about the myths and the benefits of marijuana.

My historic testimony before congress about my research and the neuropsychopharmacological effects of marijuana in humans and the devastating adverse life course effects that marijuana prohibition has had on minority populations who are disproportionately vulnerable to the casualties of the War on Drugs.

Chairman Mica, Ranking member Connolly, and distinguished members of the subcommittee, it is a privilege and honor to offer my expertise in your quest to understand more comprehensively the impact of marijuana on the individual as well as society. Currently, I am a tenured Associate Professor of Psychology at Columbia University in both the Departments of Psychology and Psychiatry. I also serve as a research scientist in the Division on Substance Abuse at the New York State Psychiatric Institute. I am a member of the National Advisory Council on Drug Abuse and am on the board of directors for the College on Problems of Drug Dependence and for the Drug Policy Alliance.

As you know, I am trained as a neuropsychopharmacologist who has spent the past 16 years studying the neurophysiological, psychological and behavioral effects of marijuana. As part of my research, I have given thousands of doses of marijuana to people and have carefully studied their immediate and delayed responses. My findings are published in some of the most prestigious scientific journals. I have also co-authored a college-level textbook focused on Drugs and society. My most recent book, High Price, is aimed at educating the general public about drugs and preventing drug-related tragedies.

I would like to point out that my remarks today will focus primarily on the effects of marijuana on adults since most agree that marijuana use – as well as other drug use – by children should be discouraged.

To be clear, marijuana is a psychoactive drug. That is, it alters the functioning of brain cells and influences our thinking, mood, and behavior. It can have both negative and positive effects. This is true of all psychoactive drugs, including nicotine and alcohol.

Another concern related to marijuana use is disruption of cognitive functioning. As is the case with alcohol, during marijuana intoxication some cognitive operations, such as response time, may be temporarily slowed, but the intoxicated individual is able to respond to environmental stimuli in an appropriate manner. Marijuana intoxication typically lasts no more than 2-4 hours, depending upon the individual’s level of experience with the drug. It is important to understand that even during the period of intoxication, the user is able to carry out her/his usual behavioral repertoire, e.g., engage in appropriate social behaviors, including responding to emergencies.

After the intoxicating effects of marijuana have dissipated, there are no detectable physiological or behavioral effects of the drug in recreational and causal users. This is similar to what is observed following alcohol intoxication. In fact, many of the individuals who have served as research participants in my studies on marijuana (during which they were administered the drug) are responsible members of their communities. Hart, Carl 2 They are graduate students, actors, schoolteachers, waiters/waitresses, professors, and lawyers, among other professionals.

One of the least discussed effects of our current approach to marijuana deals with arrest rates. Each year, there are more than 700,000 marijuana arrests, which account for half of all drug arrests. By the way, the overwhelming majority of these arrests are for simple drug possession. But what’s worse is that – at state level – black people are two to over seven times more likely to be arrested for marijuana than their white counterparts. And at the federal, Hispanics represent 2/3 of the individuals arrested for marijuana violations, despite the fact that blacks, Hispanics, and whites all use marijuana at similar rates.

The scientific community has virtually ignored this shameful marijuana-related effect. The National Institute on Drug Abuse could help remedy this situation by requesting research applications that focus explicitly on race—for example, trying to understand the long-term consequences of marijuana arrests on black and Hispanic people, especially as they relate to disrupting one’s life trajectory.

So, as we forward to develop a more rational approach to marijuana in our society, it is my hope that we not only discuss potential negative effects of the drug, but that we also include potential benefits and the unintended consequences of our current policies on certain communities of color.